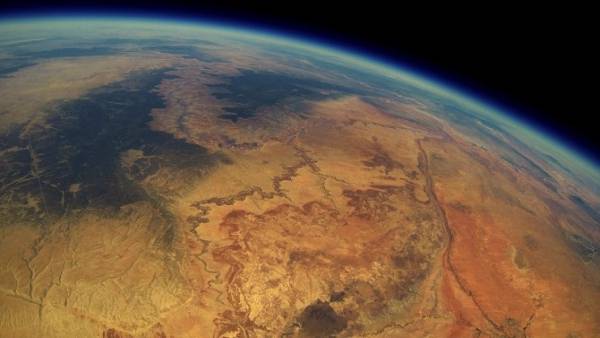 The goal was to shoot some dramatic footage of the planet, after which the balloon would burst and fall back to Earth, where an app would report the GPS coordinates back to the team for recovery.

Unfortunately, the device landed 50 miles from the launch point, in an area without mobile phone coverage, because the AT&T coverage map the team were relying on turned out to be inaccurate. And without mobile reception, there was no way to locate the GoPro.

So after spending months planning the launch (and almost cancelling it at one stage due to the high cost of helium), it seemed that all hope was lost.

But two years later, a woman hiking in the Arizona desert unexpectedly discovered the gear. Ironically, she was an AT&T employee. She returned the phone to an AT&T retail store where employees identified the SIM card and traced it back to its owner.

Several weeks later, Chan and his team were back in possession of their lost equipment, and to their amazement, the footage and data was fully intact.

The breathtaking video, available on YouTube, shows the balloon rising for 87 minutes from the launch site a few miles outside Tuba City, Arizona. It gradually ascends to an altitude of 98,664 feet.

The balloon then bursts and plummets down to Earth, coming to rest 11 minutes later among dry grass – all the while still recording. So far, the popular video has amassed more than six million views on YouTube.