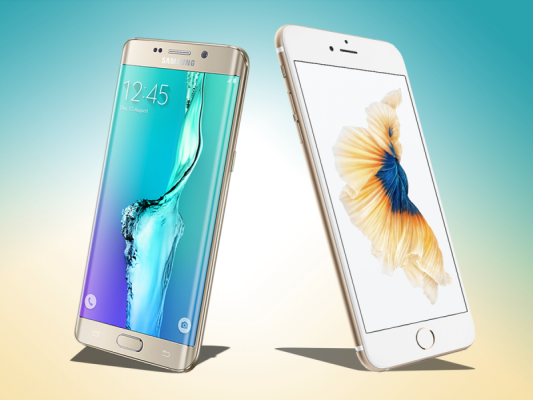 When buying a new smartphone, the display is one of the first factors to consider. And both of these devices boast exceptional screens.

The Galaxy S6 Edge+ features a stunning curved 5.7-inch AMOLED display, with a 2560×1440 resolution, which equates to a pixel density of 518 ppi. It’s unbelievably crisp, with intense eye-popping colours. Swiping along the curve opens a handy shortcut panel.

The iPhone 6s Plus has a smaller 5.5-inch screen, using standard LCD technology, rather than the newer AMOLED. Its 1920×1080 Retina screen provides a pixel density of 401 ppi. Aside from the new 3D Touch feature, this is the same display as the 2014 model. 3D Touch essentially lets you ‘right click’ by applying pressure to the screen.

In terms of exterior design, both devices look lovely, and it’s hard to pick a winner. The iPhone sticks to Apple’s classic and elegant formula, while the Galaxy is easily Samsung’s best looking smartphone.

Performance
The Galaxy Edge+ is an incredibly powerful phone, featuring Samsung’s octa-core processor, 4GB of RAM, and either 32GB or 64GB of storage. It comes with a fingerprint scanner, heart rate and blood oxygen sensor, and Near Field Communication. The battery permits 16 hours of HD video playback between recharges.

The iPhone Plus features Apple’s new A9 chip, 2GB of RAM, and either 16GB, 64GB, or 128GB of storage. It also comes with a fingerprint scanner, like the previous model. The battery offers 14 hours of HD video playback.

Camera
The Galaxy Edge+ boasts a 16MP rear camera, with optical image stabilisation, and an f/1.9 aperture. It can record 4K video, as well as 60 fps slow-motion video at 1080p.

The iPhone Plus includes a 12MP rear camera, with optical image stabilisation, and an f/2.2 aperture. It can also shoot 4K video, as well as 120 fps slow-motion video at 1080p.

Summary
It’s a close contest. Both smartphones offer sharp displays, impressive cameras, and a formidable array of features. In many ways, they’re very similar devices, and ultimately it comes down to taste and personal preference. It’s safe to say most consumers would be delighted with either option.