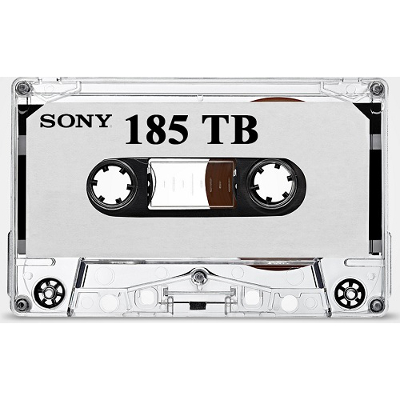 Known far and wide as a technology entertainment powerhouse, Sony has developed a special type of magnetic tape technology. Other technologies that utilize magnetic tape would be video reels from back in the day, or cassette tapes. However, Sony has discovered a way to record a massive amount of data per square inch on this tape “by independently developing a soft magnetic underlayer with a smooth interface using sputter deposition, it has succeeded in creating a nano-grained magnetic layer of fine magnetic particles and uniform crystalline orientation.”

In plain English, this means that Sony has been able to create something that allows for about 185 terrabytes worth of storage, approximately 148 gigabytes per square inch. This is the highest areal recording density discovered at this time. Before Sony made such a huge breakthrough, the most data that could be stored on magnetic tape was around two gigabytes per square inch.

How Does This Work?
Sony used the sputter method, a form of vacuum-thin film forming technology, that generates multiple layers of crystals with a uniform orientation. Previously, the roughness of the soft magnetic underlayer of the tape would have caused displacement of the crystals. However, Sony has devised a method to minimize the roughness of the surface, allowing them to create a nano-grained magnetic layer composed of fine magnetic particles of around 7.7 nanometers.

The specifications are a bit intimidating, but the point is that Sony has made an incredible discovery that could potentially change the way that data centers back up data. Presently, many data centers use magnetic tape to store data due to its ease of use and cost-effective price. Just take a moment to imagine how much extra data could be stored by simply replacing one of the conventional magnetic tapes with this new version – just one of these holds about 74 times more data than a normal magnetic tape strip!

For small and medium-sized businesses, we still HIGHLY recommend using disk-to-disk backup solutions like our BDR, due to its much faster and more effective restore times and stability, but this new technology is still interesting and worth keeping an eye on for businesses that have their own data centers.

Is this recycled technology going to matter to businesses in the future? We don’t know. But, something we do know is that data backup is as important as ever, regardless of how it’s done or how much it is. What are your thoughts on Sony’s discovery? Do you think it will revolutionize the way that data is stored? Let us know in the comments!