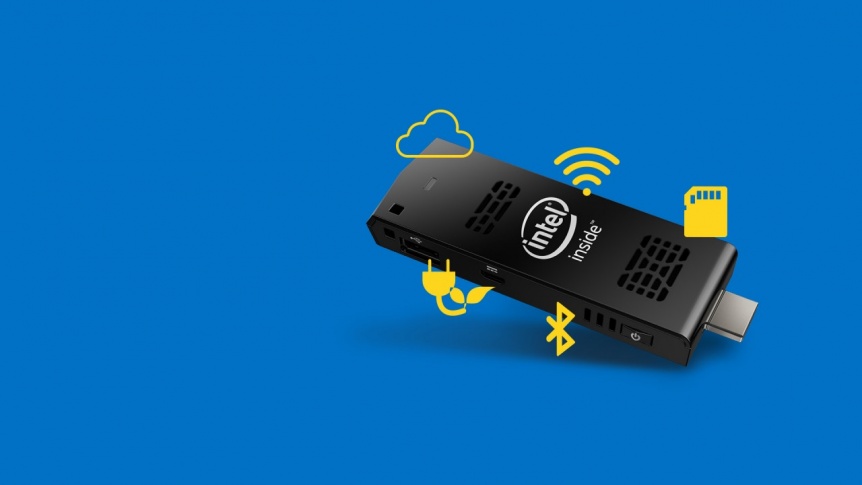 Sounds cool, but can you use it effectively in your day-to-day business operations?

Well, that depends on how much performance and compatibility you need.

To control the system, you can connect a keyboard or mouse to the single USB 2.0 port, or connect a wireless keyboard and mouse via Bluetooth 4.0 (controllers are not included).

The operating system consumes 13GB of storage, so only 19GB remains available. Extra storage can be added via the microSD slot, or you can use a cloud storage service such as Dropbox or Microsoft OneDrive.

It can’t draw power over HDMI (and there’s no battery), so you need to keep it plugged into a power source via the Micro-USB charging port.

Most Windows programs run successfully, however the 32-bit Windows 8.1 OS means the system won’t run 64-bit applications. Also, due to the small processor and low memory, the Compute Stick obviously runs slower than a standard PC. Performance is sufficient for everyday PC activities, including watching videos and playing browser games, but don’t expect to play high-end games or run demanding applications such as desktop video or image editing software.

The Compute Stick supports 802.11 b/g/n Wi-Fi, but unfortunately uses a single chip for both WiFi and Bluetooth control. Some users have reported issues with Bluetooth device latency and delay that could only be resolved by disabling WiFi.

The Intel Compute Stick lets you carry a Windows PC in your pocket, wherever you go. It’s cheaper than a Chromebox or a small desktop like the Zotac ZBOX nano. And it’s a more user-friendly device than systems like the Raspberry Pi 2. However in terms of speed, upgradability and connectivity, it falls behind traditional desktop PCs.

But it’s easy to set up, and it excels as a media streaming and web-browsing machine. At roughly $200, it’s one of the most cost effective and portable computers around.