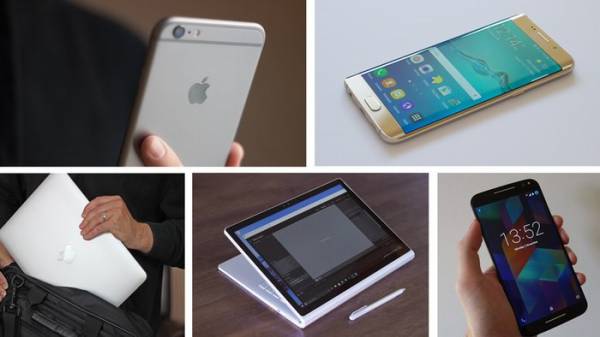 Microsoft’s Surface Book is an exceptional device. It’s a professional-level laptop, with a detachable screen that can be used as a large, light, thin tablet. It also features an excellent keyboard, trackpad, and full set of ports. The flexible Windows 10 operating system is just as comfortable running the latest games as the latest business software. The only downside is the price. From A$2,299, it’s certainly not cheap. But for those who aren’t willing to compromise on quality, the Surface Book is the ultimate 2-in-1 device.

Microsoft Surface Pro 4
The Surface Pro 4 has a larger and sharper display than its predecessor, as well as a faster processor and improved keyboard with larger trackpad. Although not as innovative as the Surface Book, the Pro 4 does offer a longer battery life, and it’s also more portable and much more affordable (beginning from A$1,349).

iPhone 6s and 6s Plus
Despite featuring only minor upgrades since the previous models, the 6s and 6s Plus are still two of the best smartphones on the market. They feature ‘3D Touch’ pressure-sensitive displays, lightening-fast processors, and top-quality cameras. The 6s is priced from A$1,079, while the larger 6s Plus begins at A$1,229.

Samsung Galaxy S6 and S6 Edge
With an ultra-thin, ultra-light glass and aluminium design, the 5.1-inch Galaxy looks the business. It boasts an incredibly crisp screen, with a resolution 77% higher than the iPhone 6s. It also features a powerful processor, impressive battery life, and one of the best cameras on the market. The S6 retails for A$999, and the curved S6 Edge model costs an extra $200.

MacBook Pro with Retina Display
Apple’s top-level professional notebook is hard to beat. With a sharp Retina display, Force Touch trackpad, speedy processor, and a full array of ports, the MacBook Pro is a serious business machine. The 13-inch model is priced from A$1,999, while the 15-inch model begins at A$3,099.