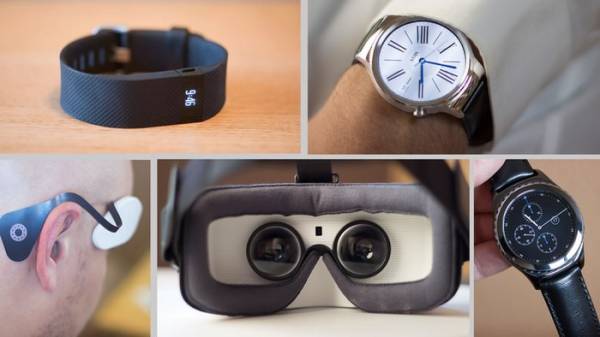 It’s the first smartwatch to look elegant and polished on your wrist. The Apple Watch features the best combination of software and hardware on the market. If you already own an iPhone, then this is a great device that integrates seamlessly with your handset. However the user interface isn’t as intuitive as we’ve come to expect from Apple. The cost is also higher than that of rival smartwatches, starting at A$799 for the 38 mm model, and A$879 for 42mm version.

Huawei Watch
The Huawei Watch is an Android-compatible wearable that could easily pass for a regular watch. With a sapphire display covering, and premium leather band, it’s a gorgeous looking piece of technology. The excellent battery life and strong performance makes this a serious competitor to the Apple Watch. The Huawei Watch is available from A$450.

Samsung Gear S2
With a unique rotating navigation bezel, the Gear S2 features the most intuitive User Interface of any smartwatch on the market. It’s the smallest Samsung Gear watch, and it’s compatible with all modern Android phones. However the voice control application, S Voice, is underwhelming, and several useful features are missing, such as the ability to schedule calendar events and reminders. The Gear 2 is priced from A$385.

Samsung Gear VR
Compatible with Samsung’s 2015 flagship smartphones, the Gear VR (powered by Oculus) is the first Virtual Reality headset to bring the technology up to a suitable level for frequent consumer use. The VR experience is so mind-blowing that you might find yourself using it every day, and the Oculus Store features a terrific content library, with a wide variety of apps, videos and games developed by the enthusiastic Oculus development community.  The Gear VR retails for A$299.

Thync
Think is an innovative wearable that uses pulses of electricity to make you feel energized or relaxed. Using low-energy neurosignal waveforms to safely signal nerves on your head and face, Thync activates specific areas of the brain to induce sleepiness, mindfulness, or calmness. It’s currently iOS-compatible only, but an Android app is due for release shortly. Thync retails for US$199, and it consumes refill strips costing US$20 for a pack of five.