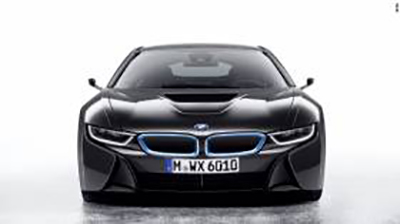 Instead of mirrors, the BMW i8 features three tiny cameras, each fitted with dirt repellent coated Gorilla Glass lenses. The cameras are located on the inside of the back window, and on the outside of the car where the side-view mirrors would normally be.

A high-resolution display replaces the rear-view mirror. By stitching together footage from the three cameras, it streams a wide-angle unobstructed panoramic view of the road and the traffic behind and around the driver.

Blind spots are eliminated, because the image covers a more comprehensive viewing angle than would be observed using regular mirrors. BMW’s software even provides warning signals on the display when it senses obstacles in the vicinity. It can detect other cars and even small vehicles such as bicycles and motorcycles.

The smart system also widens the viewing angle automatically when the driver is turning. And unlike traditional mirrors, the cameras never need to be adjusted.

Side-view mirrors are ubiquitous on modern cars, but they leave a notorious blind spot, which has resulted in many serious accidents, and they can degrade a vehicles aerodynamics while creating excessive wind noise.

Nevertheless, official road rules in many countries require vehicles to be equipped with a rear-view mirror and at least one exterior mirror on the driver’s side. This means it will probably be illegal to drive the BMW i8 on Australian roads, at least until local laws catch up to advances in technology.

General Motors has also revealed a similar feature on its new Cadillac CT6, however the CT6 uses a standard rear-view mirror that can double as a display that streams video from a rear-mounted camera.