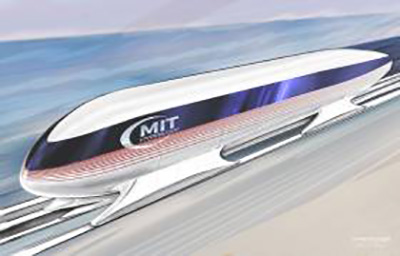 Over 1,000 university students and 100 teams took part in the competition, and presented their designs to the judging panel at Texas A&M University.

Delft University of Technology in the Netherlands, and the University of Wisconsin took second place and third place respectively.

Elon Musk conceived of the idea for an ultra-fast transportation system in August 2013, and this event brings his vision one step closer to fruition.

The Hyperloop is based around capsules that hover through steel tubes at speeds of up to 750 miles per hour, similar to the way in which an air hockey puck glides. It incorporates low-pressure tubes in which pressurised pods ride on a cushion or air, driven by air compressors and linear induction motors.

Since friction and rolling resistance are eliminated, and air resistance is greatly diminished, the pods should, in theory, be able to glide effortlessly for much of their journey. The Hyperloop initiative was aimed at driving interest in new and more efficient methods of transport.

Although Musk published a whitepaper explaining his concept for the Hyperloop, he doesn’t intend to lead its implementation. Instead, SpaceX has built a one-mile test track in Hawthorne, California to test the selected designs, and the pods themselves will be developed by others.

MIT’s prize-winning design differs from its competitors in that it employs electro-dynamic levitation, whereby electrical currents cause the pod to levitate. MIT’s team, along with 21 others, will soon test their pods and compete in time trials at the SpaceX test track in California.

Musk claims the Hyperloop would also be beneficial on Mars, because the atmosphere on the red planet is roughly 1% the density of Earth’s atmosphere. This means if the Hyperloop were to be constructed on Mars, no tube would be needed – only a track.