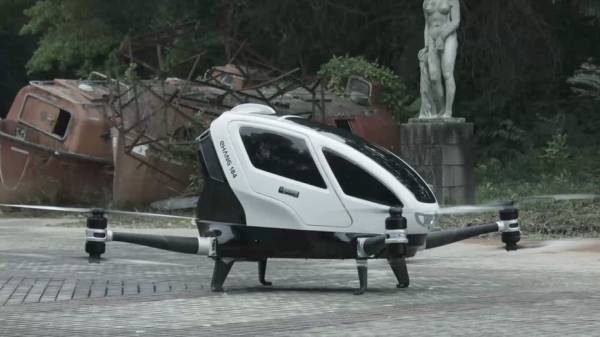 Hu wanted to minimise the risks associated with low-altitude flight by designing a safe method of personal aerial transport that doesn’t require users to hold a pilot’s license. With the Ehang 184, users simply enter the craft, switch it on, and choose their destination from the touchscreen display.

After pushing the take-off button, the Chinese-built drone ascends vertically and navigates automatically to its destination, selecting the safest and fastest route, while also avoiding obstacles along its path and communicating as necessary with air traffic control and other aircraft.

The vehicle is designed with full redundancy, with failsafe systems that take command in the event of a malfunction. If a propeller fails, the drone will continue to operate using the remaining propellers, and will immediately land in the closest unobstructed area, ensuring the safety of the passenger. The passenger may also stop the drone at any time and choose to hover in position if required.

The Ehang 184 is constructed from an aluminium alloy frame and carbon fibre/epoxy composite body. Eight individual motors output 142 HP / 106 kW to the eight propellers, which are grouped into pairs on each of the four arms. The arms fold up after landing, reducing the ground space required for storage.

The drone weighs 200 kg and can carry a load of up to 120 kg, including passenger and luggage. It has a maximum speed of 100 km/h and can climb to an altitude of 3,500 metres. The 14.4 kWh battery charges in two hours on fast-charge mode, or four hours on trickle mode. Flight time on a full charge is 23 minutes at sea level.

Ehang sources claim the 184 AAV is fully functional, with a series of global demonstration flights scheduled to begin shortly. The craft should be commercially available by late 2016, and will be priced at approximately US$250,000.