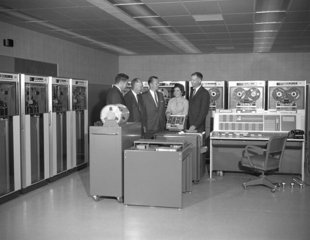 Going back as far as the 1950s, and the IBM 305 RAMAC (Random Access Method of Accounting and Control) hard disk was one of the first attempts to engage in mass data storage. However, when you see several men loading this drive onto a plane, you get a very clear idea of how much hard drives have changed! This huge system actually commanded an annual fee of $35,000, while storing a paltry 5 MB of data. When one considers that the average Apple MacBook Pro laptop now has around 500,000 times this amount of storage capacity, it is quite clear that storage still had a long way to go at this time!

By the 1960s, storage methods still looked antiquated, but technology was nonetheless developing rapidly. Although data storage was still carried out by huge devices that certainly would not be convenient for the average home user, capacity and performance were increasing significantly. IBM produced a hard disk drive which installed around 7.25 MB of data in a single removable pack, while offering a decent data transfer rate of 156KB/s.

In the 70s, home computing really began to take off. It was in this decade that IBM introduced the first fixed hard drive, and later the world’s first eight-inch HDD drive. The latter was called the “Piccolo” by IBM, and while it may look dated to the Facebook generation, those of us of an older age may at least consider this to somewhat resemble computer hardware which we are accustomed to! The Piccolo paved the way for the creation of the small-sized hard disk drives which we use today, being only 8-inches in length.

The race for miniaturisation continued throughout the next 15 to 20 years, until the world’s first thumb drive appeared in the year 2000. The first tiny hard disk drive had the ability to store about 21 MB of data, more than four times that of the IBM device which took up several rooms! Of course, thumb drive technology has developed massively since then, and we can expect a similar size drive to hold gigabytes today as opposed to megabytes.

So the way we store data has evolved rapidly, and this can be spectacularly illustrated by the physical devices used to do it. But what does the future hold? Unquestionably, cloud computing will play a massive part in this, with data being stored off-site by the majority of businesses, while Big Data ensures that commercial companies have access to almost unfathomably large amounts of information.

The technology of today would have been unimaginable and incomprehensible 50 to 60 years ago, but it is on the foundations laid by the likes of IBM that the incredible technology available today has become possible. For all your data storage needs give us a call on 1300 880 636.