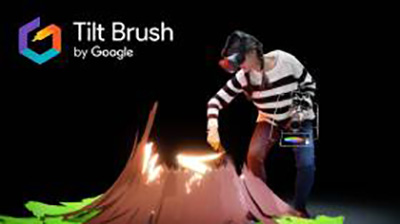 Wearing the HTC Vive headset, artists can draw and create three-dimensional images, and manipulate their surroundings, using the HTC hand controller. An intuitive virtual toolbox allows users to select colours, brushes and other tools, including a mirror function that replicates brush strokes along multiple 3D planes of symmetry. It’s even possible to paint using fire, light, snowflakes and stars.

Your room becomes a blank slate, where you can step around and through your own drawings. Digital creations can be easily saved and shared with others, either as animated GIFs, or as room-sized virtual reality walkthroughs. There’s also an undo function, and snapshots of your masterpiece can be taken at various stages of design.

Virtual Reality has the potential to inspire a new generation of graphic designers and artists to build breathtaking landscapes, in which fans can travel and interact with their environment. And beyond painting, Google views the application as a creative tool for professionals like fashion designers to sketch out ideas.

Tilt Brush also opens up a world of imagination and creativity for children. One commenter on Google’s blog posted the following story of his experience with the application.

“I was showing Tilt Brush to a friend and his son, he’s maybe 8 years old. His son sits on the floor and pulls his knees up, and makes these sweeping arcs overhead. I can see his point of view from my monitor but have no idea what he’s painting, everything is mostly white. He stops, crawls forward a few feet then stands up to look back at his painting. It’s an igloo. His very first time using VR and trying Tilt Brush, the kid immediately understood he could build 3D inhabitable objects. Then he crawled back inside. I died, this kid blew my mind!”

With Google Tilt Brush, your living room becomes a virtual digital canvas, and the creative possibilities are limitless.